Thin solar cells on paper and other printable material can now be produced with inkjet printing. It will allow solar cells to be more sustainable and much cheaper. Imagine this – printed solar panels Newcastle can be placed almost anywhere!

It may still seem far-fetched to imagine our homes powered by solar cells in curtains, blinds,  windows and even wallpaper. But some scientists say they have successfully printed photovoltaic elements on a wide range of surfaces and materials.

Printed solar cells have exciting potential for generating electricity –how’s that for flexible, cheap alternatives to silicon panels? In the traditional silicon solar PV, which we generally see on the roofs of homes in our neighbourhoods, the most expensive component is the silicon-based material that contains the photovoltaic elements. Silicon is abundant and non-toxic, but the manufacturing cost for photovoltaic solar panels on rooftops is exorbitant.

The idea of ​​using a beach umbrella to harvest electricity while going out to the beach or a tent on a camping weekend could propel glamping (glamour camping) to a higher level, with free power!

Currently, printable solar cells achieve only 10% efficiency, whereas conventional solar photovoltaic cells have an efficiency rating close to 25%. The lifespan of printed solar cells is also only six months; however, researchers are continually working to increase their efficiency, weather resistance and shelf life to achieve commercial viability.

From 2004 to 2007 – a team of dedicated researchers worked tirelessly to produce commercially viable printed solar panels which they have put to the test in energy-efficient applications over the years. 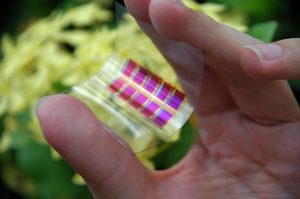 While the price of silicon is going down, plastics might be a cheaper alternative. With the cost of the ink being negligible, other raw materials are very cost-effective as well, adding to the step toward sustainability. It is a big step forward because you can install these cells wherever you can think of. In addition, the flexibility is better than that of silicon as printed cells work well in cloudy weather.

Already, printed solar cells are  “a key part of the renewable energy mix.” and several manufacturing companies are moving forward.

Precisely, How do They Make Printed Solar Cells?

Currently, printable solar cells are made by printing a specially designed ‘solar ink’ on plastic film in the same way as plastic banknotes.

Find out more about the latest in solar power technology with your friendly team at printed solar panels Newcastle. They are your forward-thinking folks who are passionate about harnessing solar energy and getting homeowners like you to get off the grid. Visit their website or call them now.